Each day, for almost two years on our way home from school, my daughter Marin and I would see a man standing on the corner. Sometimes he had a sign, asking for help, but most afternoons he sat and smiled at people as they stopped at the red light near his “spot”. Over the months, we’d open our windows and speak with Donnie. We gave him winter gloves, energy bars, juice, or just shared a short, pleasant conversation. We knew he lived at the nearby Boulder Shelter for the Homeless. His eyes were sky blue, sometimes bright, other times vacant, distant. On the rare day that we didn’t see Donnie, we’d wonder aloud where he was.

Last July, Donnie passed away. A cardboard sign was placed in his “spot”: Rest in Peace, Donnie.

For her 8th birthday in August, instead of asking for gifts for herself, my daughter asked her friends for donations for the Shelter in honor of Donnie. Her friends came with checks and pennies and tubes of toothpaste, helping Marin to raise $111.43. When she delivered this to the Shelter, not only did the Executive Director and Development Director personally greet us, they spent a good half hour giving us a tour of the Shelter. A good friend of Donnie’s, Chris (seen here with Marin) joined us and gave Marin this photo of Donnie, as well as one of Donnie’s favorite hats. It was an afternoon–and an experience–that neither Marin or I will soon forget.

Think about instilling in your kids a sense of philanthropy. You could get a piggy bank that not only has room for “spend” and “save”, but also a space for “give”. Show them that it’s okay to open their hearts. Allow their innate sense of compassion to blossom. Encourage them to start a food drive, a collection of pennies, or simply share a smile with someone less fortunate. If children learn to share and give and love without limits early in their lives, imagine the changes that the world will see. 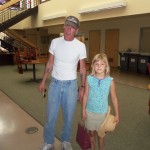 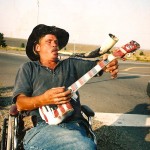 TrackBack URL  |  RSS feed for comments on this post.

Promote Your Page Too